CIMA’s Celebration and Awards Gala is our annual party to give props to those who innovatively create, support and strengthen Canada’s independent music industry.

Named after CIMA’s former president (then CIRPA), a tireless champion of Canadian music, Independents and copyright reform, the Brian Chater Industry Award recognizes individuals in our independent music industry who demonstrate a transformative commitment to their craft, their company or organization, or to the industry at large. Nominees for this award can be a manager or employee who demonstrates strong leadership through such efforts as:

The Unsung Hero Award recognizes unwavering commitment and outstanding support to the Canadian independent music industry. This award is designed to recognize any individual, group, or organization that may not necessarily be on the industry’s ‘awards radar’ but yet has made an outstanding and exceptional contribution to the independent music community in Canada.

The Builder Award is designed to spotlight outstanding individual(s) (or organizations) who have made a significant, influential and longstanding contribution to the Canadian Independent Music Industry. This award is given to those trailblazers who have earned the industry’s genuine gratitude and respect for paving the way for today’s music professionals to thrive, shaping our love for music while helping to define the Canadian music industry.

Innovation knows no bounds in the digital era, and creative approaches to promotional campaigns, be they viral, experiential or lifestyle-focused, make for an exciting landscape in which to launch new projects. Whether for music releases, tour announcements, fan engagement initiatives, cutting-edge activations or anything in between, Canada's independent community knows how to turn heads and command attention for its artists, whether budgets and teams are large or small. This award acknowledges the marketing power, creativity and inventive fire of our indies. Companies and individuals who delivered exceptionally successful and unique marketing campaigns in support of independent Canadian music are invited to submit nominations for consideration.

Due to the pandemic, CIMA’s Celebration and Awards Gala was not held in 2021. However, as part of CIMA’s Business Summit on June 22 & 23, CIMA honoured three Canadian heavyweights within the industry with awards for their immense contributions to our indie music sector.

CIMA was thrilled to honour the following three receipients: 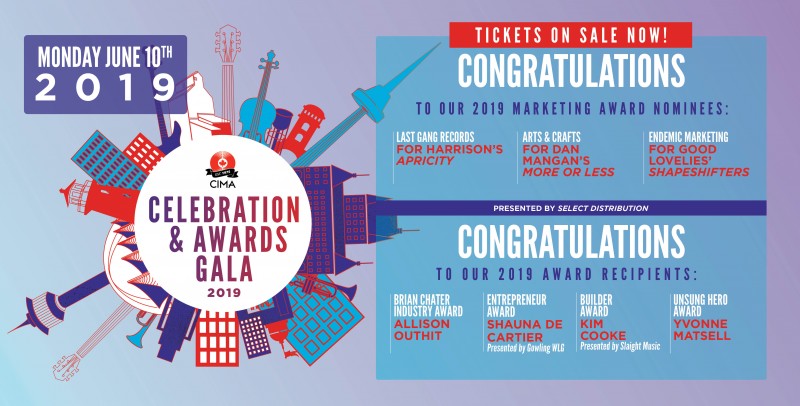 In 2019, CIMA honoured the next set of passionate pros - pulling from all branches and levels of the biz - with the Entrepreneur Award, Brian Chater Industry Award, Unsung Hero Award, Builder Award and Marketing Award categories.

The 2019 honourees were recognized for their incredible contributions to independent music during the gala on June 10, 2019 at Lithuanian House Banquet Halls in Toronto, ON. The event was hosted by CBC Music radio personality, Angeline Tetteh-Wayoe.

The Marketing Award honouree will be announced at the 2019 CIMA Celebration & Awards Gala on June 10. 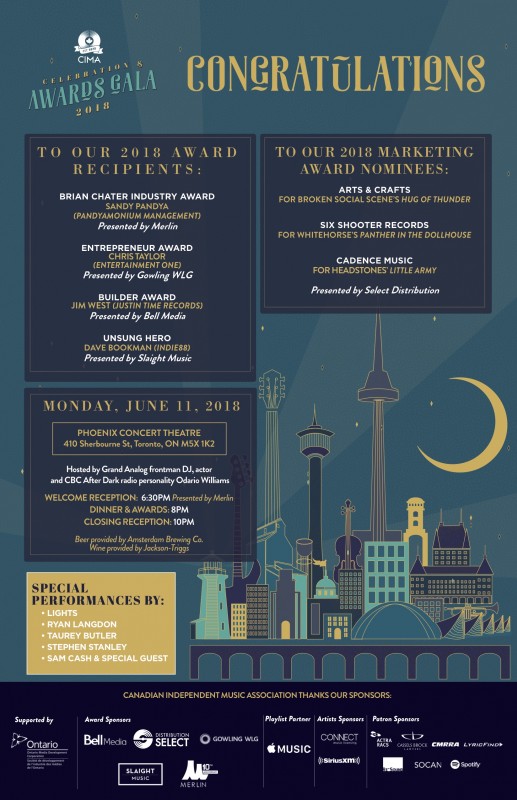 Our 2018 honourees were recognized for their incredible contributions to independent music at the fourth annual Celebration & Awards Gala on June 11, 2018, at the Phoenix Concert Theatre in Toronto. The event was hosted by Grand Analog frontman, DJ, actor and CBC After Dark radio personality, Odario Williams.

The following artists joined us live to pay tribute to this year's award recipients: 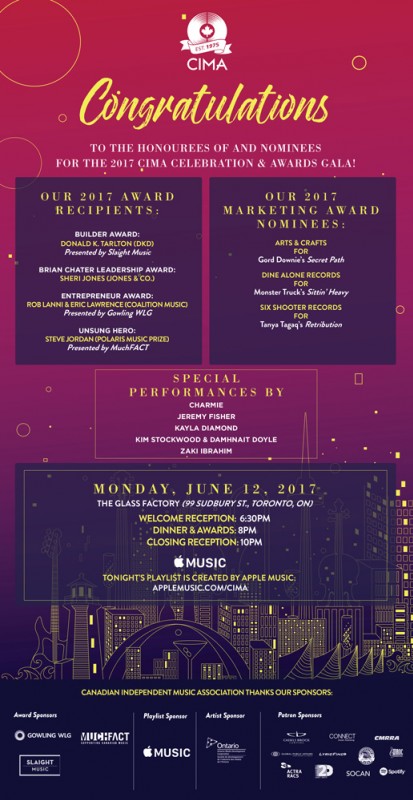 Our exclusive playlist partner for the evening was Apple Music.

Marketing Award (inaugural): Coalition Music, in recognition of their outstanding work with USS

Our 2nd Annual Celebration & Awards Gala was a special night that could only happen with the support of our exceptional members, colleagues and friends.

Credit must be given to our sponsors, without whom the event would not be possible: FACTOR, MuchFACT, Merlin, the Ontario Media Development Corporation (OMDC), Slaight Music, CBC Music, Gowling WLG, Stoney Ridge, ACTRA RACS, BuzzAngle, the Canadian Federation of Musicians, CMRRA, Re:Sound, MROC, SOCAN, Steam Whistle and the Government of Canada. 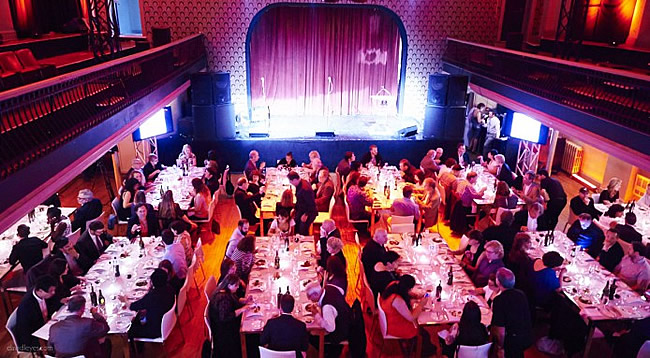 The Canadian Blast Afterparty included a showcase of some of the best emerging talent that Canadas independent music scene has to offer with sets from CAIRO, Grand Analog, Aint No Love and The OBGMS.