Due to the pandemic, CIMA's Celebration and Awards Gala will not be held in 2021, however as part of the Business Summit on June 22 & 23, CIMA will still be honouring three Canadian heavyweights within the industry with awards for their immense contributions to our indie music sector. If you haven't registered for the 2-day virtual summit yet e-mail Sam Rayner (samr@cimamusic.ca) for the link!

CIMA is thrilled to announce the three recipients for the 2021 Pivot Award, the Trailblazer Award and the Builder Award. Join us virtually on June 23 to honour William "Skinny" Tenn, Chris McKhool and Ebonnie Rowe! 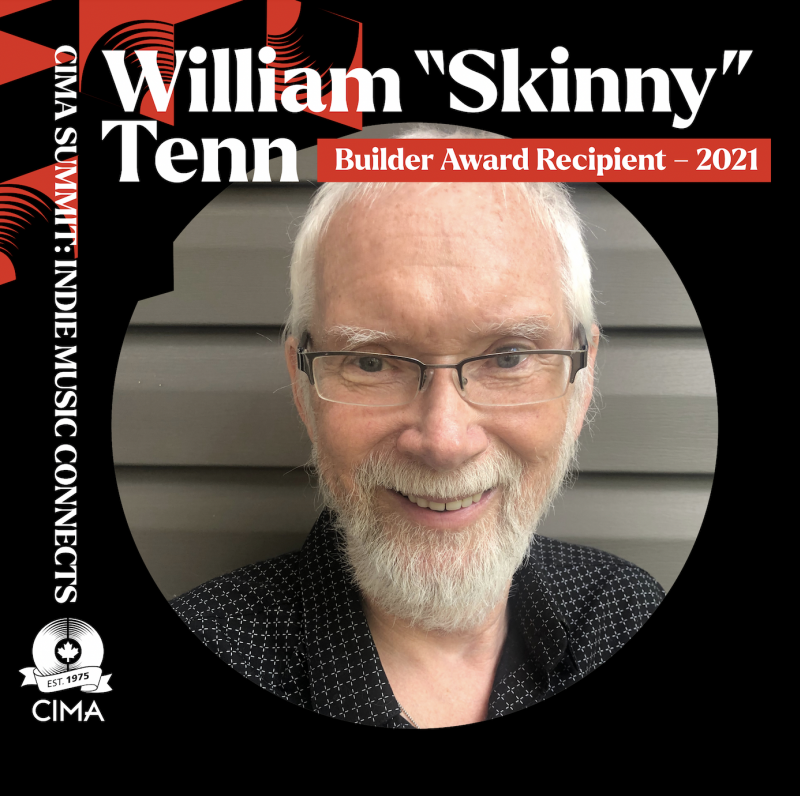 Award Description: The Builder Award is designed to spotlight outstanding individual(s) (or organizations) who have made a significant, influential and longstanding contribution to the Canadian Independent Music Industry. This award is given to those trailblazers who have earned the industry’s genuine gratitude and respect for paving the way for today’s music professionals to thrive, shaping our love for music while helping to define the Canadian music industry.

In the mid-1950’s in Saskatoon, a just turned teenager, practically on the verge of juvenile delinquency, begins to find direction in life as the first rock ‘n’ roll records debut on radio and juke boxes. Industry veteran William “Skinny” Tenn, began his music career in the mid-sixties as a radio announcer/music director at CKOM in Saskatoon, later holding the same position at CKCK in Regina. All of this would inevitably lead to a lifetime career promoting and protecting the careers of contemporary musicians.

Skinny left radio and Western Canada to move to Toronto with Saskatoon group Kenny Shields and the Witnesses as their manager in 1969. Throughout the seventies, Skinny was a founding partner in Toronto booking agencies Music Factory and Music Shoppe, representing such acts as Rush, McKenna Mendelson Mainline, Lighthouse and Fludd. He signed Fludd to an international deal with Warner Bros. in 1971 and managed the group for seven years, seeing them through 13 charted singles.

In 1988, he held the position of A&R at Island Records Canada which lead him to become Creative Director in 1990 for Frank Davies’ MCA co-venture firm TMP (The Music Publisher) that represented the likes of Jane Siberry, Murray McLaughlin and Ian Thomas.Skinny continued to manage artists including Pukka Orchestra, Mendelson Joe, Andrew Cash and Brian Plummer.

1991 saw the beginning of Skinny’s partnership with Sandy Pandya and the formation of Pandyamonium/William Tenn Artist Management, whose clients included gold-selling artists Lowest of The Low, The Waltons, and By Divine Right. Over the next decade, Sandy and Skinny’s roster included double Juno-nominee Hayden and his label Hardwood, double-Juno winner Hawksley Workman, Luther Wright & the Wrongs, and soon-to-be star Serena Ryder.

Together, the management team secured world-wide/U.S.-based recording and publishing deals with Geffen Records and EMI Music for Hayden, which were unprecedented agreements for a developing artist at that time and brought management clients Tegan and Sara to the attention of Elliot Roberts who immediately signed the Calgary twins to Neil Young’s Vapor Records. Hayden’s debut “Everything I Long For” went Gold in Canada via Sonic Unyon/Hardwood and in turn Universal Records.Hayden went on to successfully tour North America, Europe, Japan and Australia as well as record and develop his career to this day.

In 2005, Skinny further developed Hardwood Records, where management client Cuff the Duke became the second artist (after Hayden) to appear on Hardwood since its inception in 1995. Primarily concentrating on a total of 7 Hayden albums internationally, Hardwood would go on to release records by Basia Bulat and Lou Canon.

In 2014, Skinny formed licensing company Songplugger representing a roster of primarily indie singer/songwriters, where much to his liking, and with no less than 60 years of teaming up with some of Canada’s finest talent under his belt, he was able to begin the process of semi-retiring. 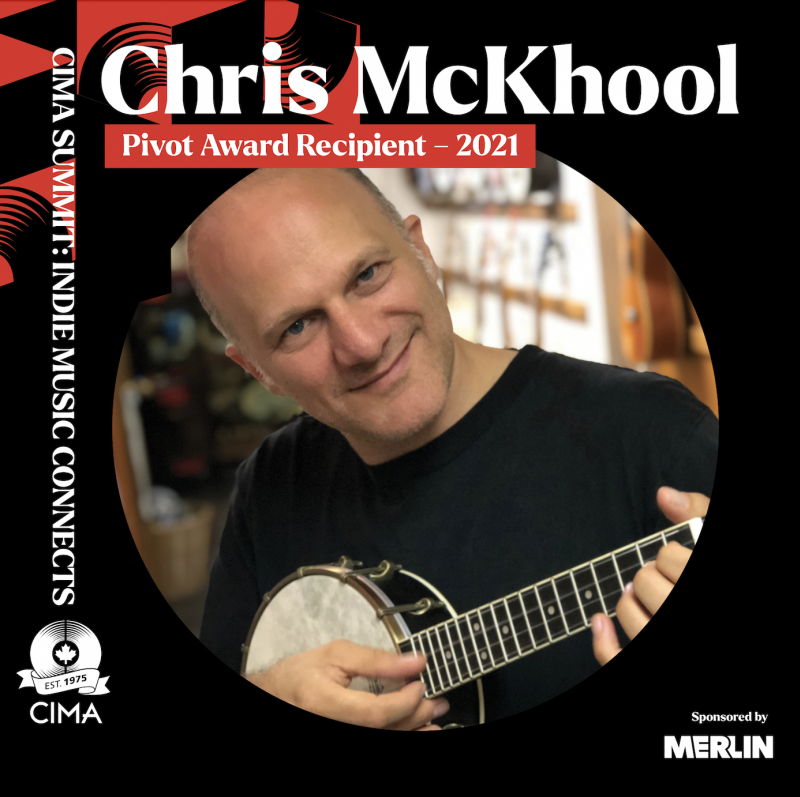 Award Description: As the world was forced into managing through the global pandemic, the music industry was one of the hardest hit sectors, especially due to the elimination of live music. The Pivot Award is being introduced to acknowledge an individual (or group) who has responded to the pandemic in positive, impactful and innovative ways. In particular, this award will recognize the individual (or group) who pivoted their business model and provided unique solutions to address significant challenges brought on by Covid 19. The Pivot Award winner is an individual who was successful in introducing unique new solutions, opportunities and products or services during the last year, assisted others with their new solutions and generated new revenues based on their pivot.

At the beginning of the pandemic Sultans of String had their 80 show US tour cancelled, and after a pause, made a hard pivot to online programming and concerts with their Refuge project, using these Livestreams to celebrate their amazing collaborators with live performances, guest appearances, spoken word, and conversations. Along the way Chris taught himself from scratch how to build a Zoom Room and self-produce a 5 camera shoot complete with digital sound, operated by foot pedals. He held monthly concerts for an expanding fan base, performed 50 education shows across Ontario, and raised thousands for the local Burlington Food Bank, Environmental Defence, awareness for fighting the proposed Hwy 413 zombie highway through Ontario Greenbelt, and their UN Refugee Agency fund. 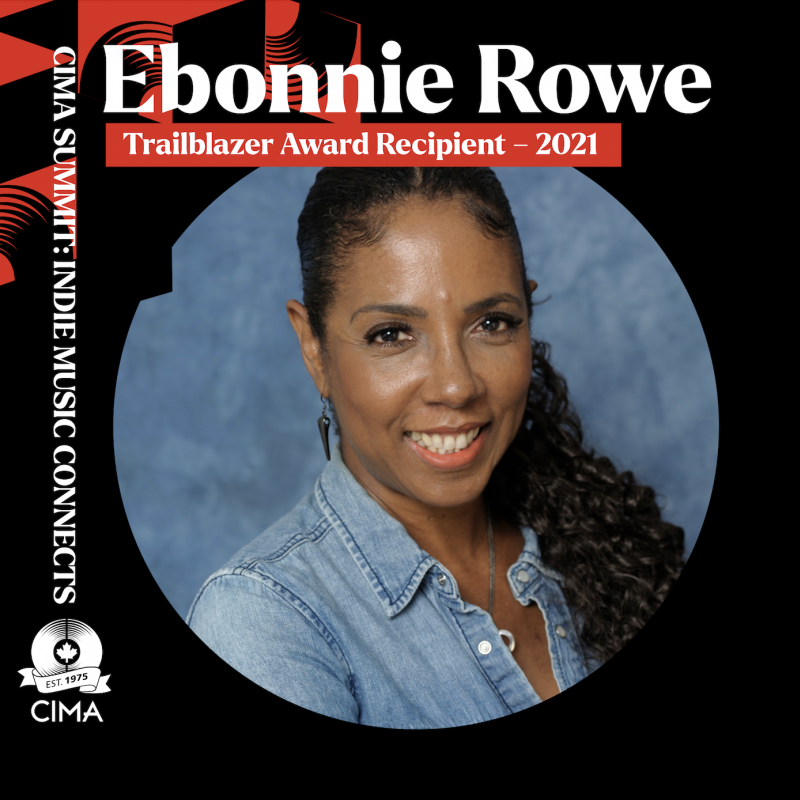 Award Description: As the issues of equity rose to prominence over the last year, the Trailblazer Award is being introduced to acknowledge an individual (or group) who has demonstrated leadership and action with respect to building equity in our industry. In particular, the award will recognize the individual (or group) who were instrumental in raising consciousness within the music industry with regard to issues of equity and were influential in providing guidance and potential solutions to breaking down barriers and paving the way for increased equity.

Ebonnie Rowe has distinguished herself throughout her career as someone dedicated to the growth of others and the support of causes with a positive community impact. Born in Montreal and raised mostly in Toronto, both of her Barbadian parents had a commitment to voluntarism and involvement in the community and raised the family in that tradition of service and helping others.

While Ebonnie was studying at the University of Toronto, a friend of hers died suddenly. The loss was devastating; it made her realize the shortness of life, the silent despair suffered by many.This fueled her need to do something that meant something to leave a significant legacy. Determined to have a constructive influence on the lives of others, she went on to volunteer with many organizations that cater to some of society’s overlooked groups, eventually founding a mentorship program - Each One Teach One, which matched black youth with black professionals, the idea being that the youth needed to see themselves succeeding in places that they aspired to be in order to combat the negative stereotypes they were seeing of Black people portrayed in the media.

She also started PhemPhat Entertainment Group, a dynamic, non-profit company that provides promotional, mentoring, networking, educational and performance opportunities for emerging female artists and to support and promote women’s charities. Ebonnie is the producer of the Honey Jam concert and programme for young female artists of all cultures and musical genres.The initiative started in 1995 and they celebrated their 25 year milestone in 2020. Artists such as Grammy Award winners Nelly Furtado and Melanie Fiona, along with Juno winners Kellylee Evans and Jully Black and Polaris winner Haviah Mighty and many others performed early in their careers.Rowe has organized impactful experiences for the artists such as songwriting camps, industry workshops, mentor cafe's, tickets to major artist concerts, opportunities to attend the Polaris, Juno and Grammy Awards, and sessions to learn from major artists such as Jessie Reyez, Marsha Ambrosius, Destiny's Child original member LeToya Luckett, Elle Varner, Erykah Badu, Janelle Monae and more.The programme creates a welcoming, supportive sisterhood and a safe space to be vulnerable, to learn, to build self esteem and long-lasting relationships. It is for her a passion project which she also produces in Barbados.

Featured in the book “Canada 150 Women - Conversations with Leaders, Champions, and Luminaries”, listed in the Who’s Who of Canadian Women and chosen as “Miss Chatelaine” Ebonnie was also featured in TD Bank’s Canada-Wide Black History Month promotion in their branches featuring the initiatives they support led by members of the Black community.She was selected as one of 1000 women photographed by Parisian photographer Pierre Maraval for an exhibit co-produced by Luminato and L’Oreal Paris.Titled “Mille Femmes”, it aimed to capture inspirational women who embody the passion and heritage behind Toronto's artistic community. And when Michelle Obama spoke in Toronto at the Conscious Economics event sponsored by the Economic Club of Canada, she was chosen by the How She Hustles women’s network as part of a group lauded for their impactful work benefitting women and girls to be a specially invited guest.

Ebonnie’s work with Honey Jam as well as the Each One Mentoring programme for at risk youth which she also founded has earned her many awards, including: