The presentation was a combined celebration of their first acclaimed best-selling book, Sharon, Lois & Bram's Skinnamarink and to officially launch their new album Sharon & Bram and Friends. CIMA extends its heartfelt congratulations to Sharon, Bram and the team who supports them (Casablanca Kids label and Casablanca Media Publishing). CIMA welcomes Sharon & Bram to the Road Gold family. 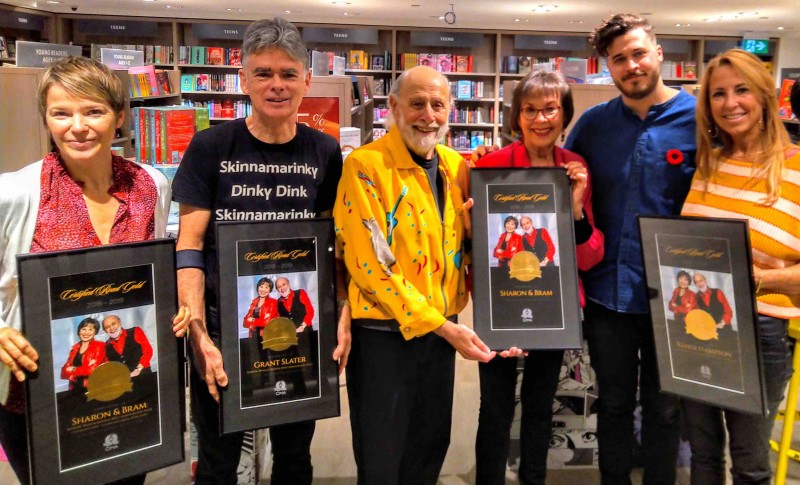 About Sharon and Bram:

Since 1978, Sharon Hampson and Bram Morrison have been pre-eminent in all aspects of family entertainment across North America as members of the trio Sharon, Lois & Bram. Together, the threesome produced 21 full-length albums, beginning with their iconic, triple platinum One Elephant, Deux Éléphants. They have appeared in every major concert hall in Canada and many of the most prominent venues in the United States including Carnegie Hall, Lincoln Center, The Kennedy Center, and the White House. They have received countless awards, including Gold and Platinum Records and JUNO awards for Best Children’s Album, and have sold millions of albums worldwide. For their years of work providing the best in participatory music for children and their families, Sharon & Bram, along with Lois, were inducted into The Order of Canada, their country's highest honor.

Having recently retired from touring, Sharon & Bram are now engaged in other creative ventures, including the release of a series of singles that can now be heard on their first duo album, Sharon & Bram and Friends. Released by Penguin Random House in September 2019, their picture book, Sharon, Lois & Bram's Skinnamarink, already a critically acclaimed best-seller, is co-written by Sharon’s daughter, Randi Hampson, and graced with delightfully imaginative illustrations by Qin Leng.

Sharon & Bram's recently released singles, "Skinnamarinky Two," "The Drum Song," "Different," "The Colour Song," "Talk About Peace," and "The Hug Song," "Everybody Talks" are available for purchase at iTunes, Amazon, Google Play, and other digital retailers.