Election campaigns are noisy and confusing. They are also super important.

Join CIMA and several political experts this Friday, September 17 for Sound ✓ Check: Rock the Vote with Confidence - a free virtual town hall and pre-election primer designed to help the indie arts and culture community get clear on where the parties stand on arts and culture issues as well as affordable housing, climate change, health care, regulating Big Tech and Covid income supports.

Tune in for free this Friday from 3:00- 4:00PM (EDT) to gain helpful information and more context before heading to the polls on September 20! 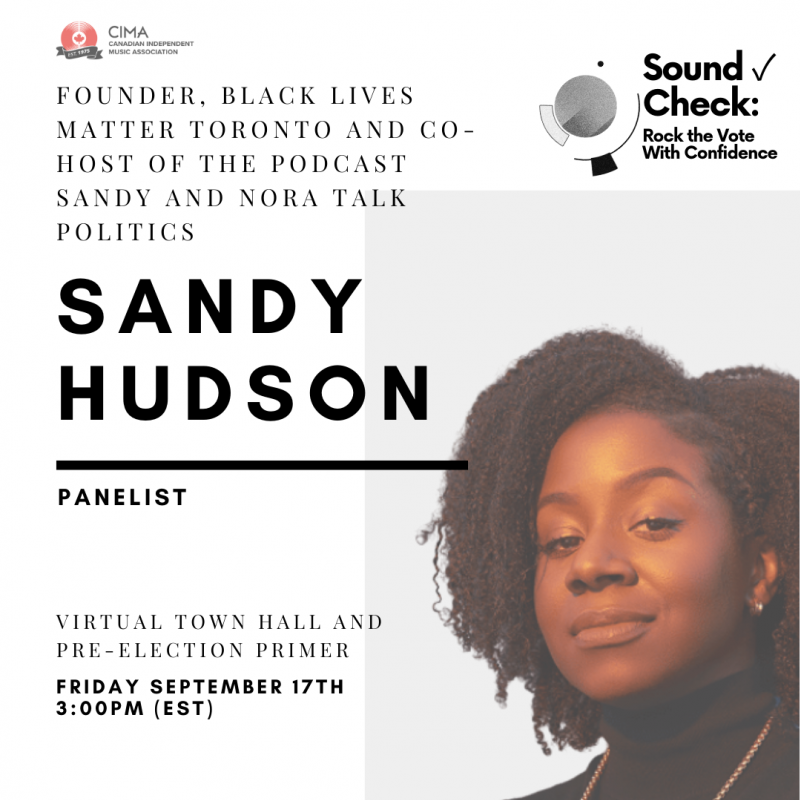 Sandy Hudson is an activist, multidisciplinary creative and writer with a talent for inspiring others to imagine just futures.The founder of the Black Lives Matter movement presence in Canada and Black Lives Matter – Toronto, Sandy also co-founded the Black Legal Action Centre, a specialty legal aid clinic, which provides direct legal services and test case litigation for Black communities in Ontario, Canada. Sandy is currently based in Los Angeles and serves as an international organizer for Black Lives Matter – Grassroots and the Director of Strategic Planning for the Wildseed Centre for Art & Activism.

A dynamic and matter-of-fact communicator, Sandy has a unique ability to distill complex ideas into manageable, concepts for large audiences. Sandy currently co-hosts the Sandy and Nora Talk Politics podcast with Nora Loreto, and has been featured in the New York Times, Newsweek, NPR, the Toronto Star, CTV News, CP24, Global News, Buzzfeed, and KTLA. Her published work appears in Maclean's Magazine, Chatelaine, FLARE magazine, the Washington Post, the Toronto Star, and the Huffington Post, among others. Tackling a range of social justice issues from anti-Black racism to feminism, Sandy is a natural thought-leader and has a gift for finding the common ground we need to make a better society. 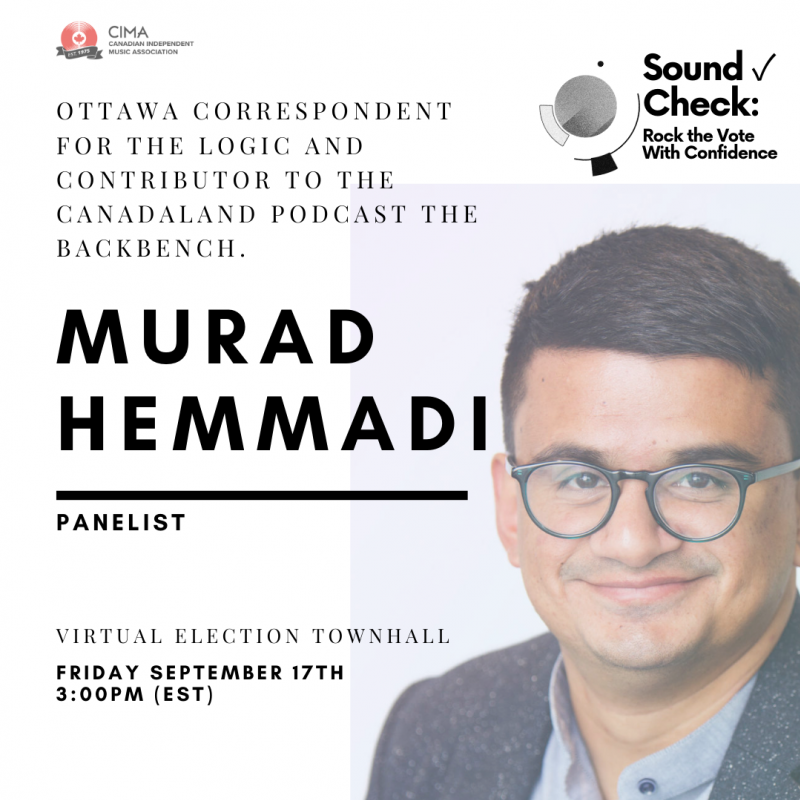 Murad Hemmadi is an Ottawa correspondent for The Logic, covering business and innovation policy, as well as companies including Shopify. Before joining The Logic, he covered politics and wrote a daily newsletter for Maclean’s. He started his journalism career as a reporter at Canadian Business, covering the technology sector, entrepreneurship and small- and medium-sized enterprises.
Alex McKeen 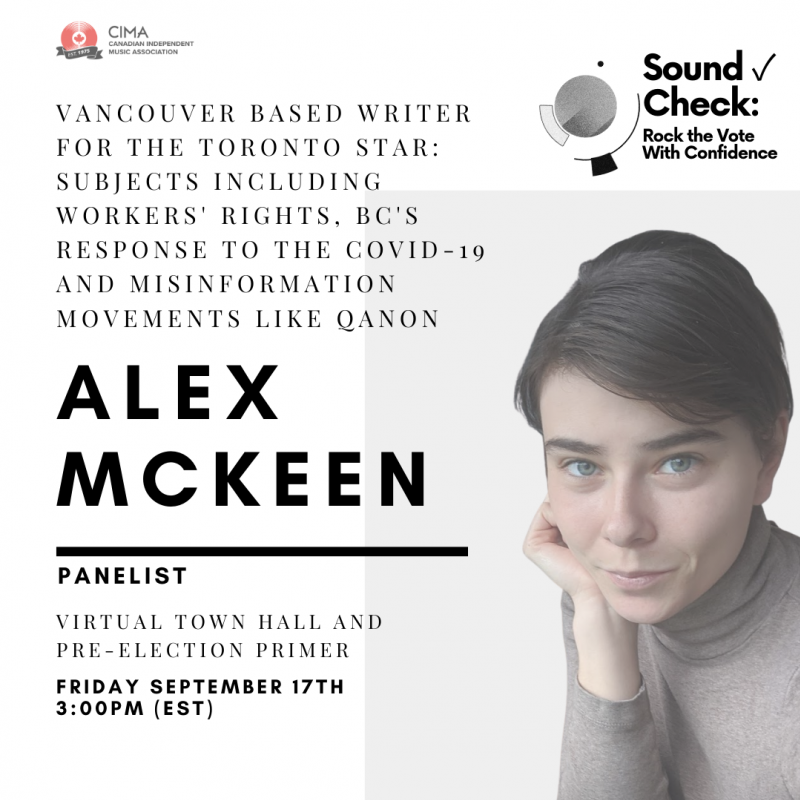 Alex McKeen is an award winning journalist working as a B.C. Bureau reporter for the Toronto Star. She writes all kinds of stories about life in western North America, including the civil disobedience at Fairy Creek, B.C.’s response to the COVID-19 crisis, and workers rights. She reported on the 2020 U.S. election -- and misinformation movements like QAnon -- from Portland and Phoenix for the Star. She has an honours B.A. from the University of Toronto in Contemporary Asian studies and music. 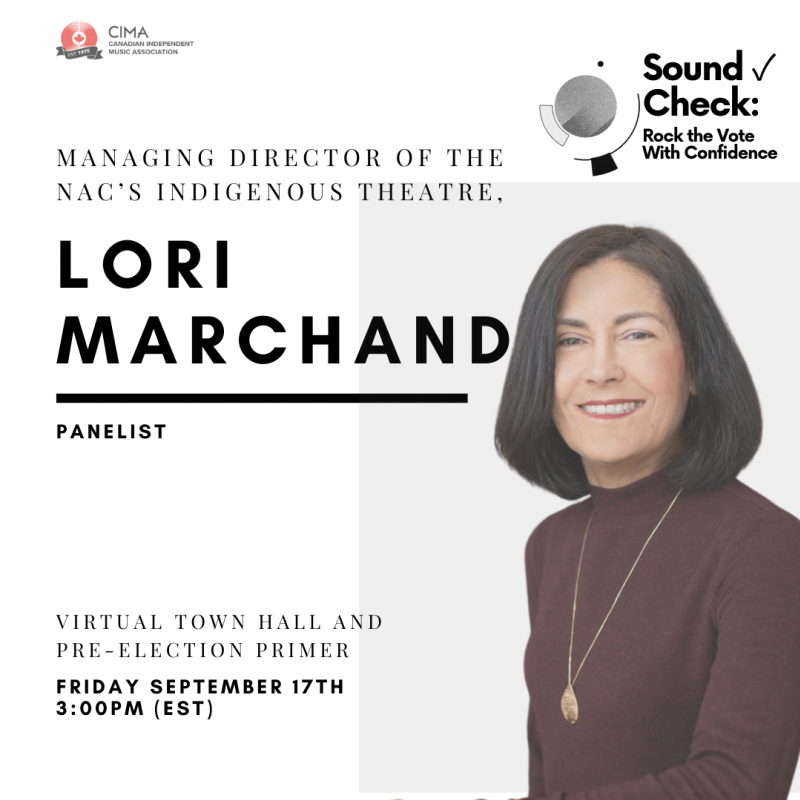 Lori Marchand became the first Managing Director of the NAC’s Indigenous Theatre in April 2018. She is a nationally recognized leader within the professional theatre community who made a significant impact as executive director of Western Canada Theatre for over 18 years prior to joining the NAC. A member of the Syilx First Nation, she has played a key role in the encouragement, development and production of Indigenous work. Ms. Marchand spent much of her early years in Ottawa when her late father, the Honourable Leonard S. Marchand, was elected as Member of Parliament for the riding of Kamloops-Cariboo. During her time at Western Canada Theatre, Ms. Marchand used her considerable leadership skills to make live theatre accessible, innovative, powerful and financially sustainable, and has helped make WCT the southern Interior’s largest professional theatre company. She was also an active member of the BC Arts Council from 2010 to 2017.