Is your music company in good digital health? Time for a check-up! Join us on a 3-part series discussing the world of digital distribution

CIMA has developed a 3-part series to discuss the world of digital distribution for labels and anyone interested in the process of distributing their own music. The three sessions will cover what’s required when working directly with digital service providers, understanding digital analytics and discussing the importance of metadata. Join us over the next three Thursdays beginning February 18th at 1:00pm EST. This series is supported by Merlin.

Session 1: Understanding Digital Analytics: Why They’re Important & How to Harness Their Power

Description: Metrics and analytics are everything in the modern music industry; from understanding consumer patterns to building strong pitches, demystifying and accessing the free data (and paid) available to you is a game-changer. Discuss with experts how to leverage trends and market data to compete in tomorrow’s market.

Driving Monstercat’s global strategy with a heavy focus on Asian Markets, Daniel has experience in securing digital licensing deals across developed and emerging markets. He has worked directly with Artist and Management teams to sign Recording and Publishing deals for the likes of Marshmello, Vicetone, SLANDER, Infected Mushroom and Kaskade.

In addition to his work at Monstercat, Daniel currently sits on the board for MusicBC, working to support and empower music professionals in British Columbia.

Jess Mitchell is a passionate and collaborative music industry executive with over 13 years’ experience in brand development and digital marketing. Currently based in Vancouver, Canada, she is the Marketing Director for electronic music’s most influential independent record label, Monstercat. Jess is responsible for leading the company’s global strategy across Music, Events, Apparel and Gaming, building strong fan loyalty and increasing brand reach. Last year she spearheaded the marketing efforts behind a Fortnite concert featuring the premiere of DJ and producer Slushii’s track, “All I Need”, officially Monstercat’s fastest-growing single to date.

Prior, Jess held senior marketing roles across the U.S. and Australia, working at major labels including Sony Music. With a commitment to authentic artistry and innovative global campaigns, she has worked with some of the world’s most iconic musicians including Justin Timberlake, Miley Cyrus, Beyoncé and others.

Prior to Entertainment Intelligence, Erik was an executive at The Cooking Vinyl Group, where he was a board director at their wholly owned label services company, Essential Music & Marketing. Essential was acquired by Sony in 2016.

From 2003 until 2011, he led global label acquisition and client strategy for digital distributor The Independent Online Distribution Alliance (IODA), serving on its executive management team. IODA was acquired by Sony in 2009, and subsequently merged into The Orchard.

Successfully started, built, and managed the independent record labels Asphodel & 75 Ark. Neither of these were acquired by Sony. Of particular merit, while at 75 Ark, Erik was the first record industry executive to form a strategic alliance with controversial file swapping service Napster.

A founding member of US independent label trade body A2IM, Erik was also a MERLIN board member 2013-2016.

Erik began his career in the entertainment industry when he became the beneficiary to some 300 published compositions that included numerous pop hits from the 1920's and 1930's. With Duchamp Inc, he continues to manage various publishing interests.

Session 2: Mighty Metadata: If You Don’t Keep Your Investments Under Your Mattress, Then Why Would Your Metadata be on a Spreadsheet (or Worse)?

Description: Are you interested in maximizing your revenue and controlling your digital business? To do so effectively, you need to learn the ropes of metadata, which is crucial to ensuring your music connects back to you as a rightsholder. Learn from and chat with experts who can help you master this simple but important administrative piece of running a music business.

Caitie Sarnie is the Data + Product Operations Manager at Redeye Worldwide. She's passionate about music data and buying too many records. Her north star is to bring solutions and ease of use to all artists and labels, leveling the playing field for indies in a highly saturated marketplace. She's best known for achieving Preferred Partner Status with Spotify for Redeye. She currently lives in Durham, North Carolina with her husband, two wild children, and a very old cat.

Jonathan Bender has 25 years’ experience in the recorded music industry. His area of expertise is designing digital workflows and the asset management systems needed to support an industry of streaming micro-transactions. He has held senior operating roles at EMI Music, Universal Music, Concord Music, and most recently served as Chief Operating Officer of SoundExchange 2011-2020. During his tenure at SoundExchange, the company doubled its distribution of performance royalties, distributing over $1 billion annually in royalties to artists and rights owners.

Jonathan is a graduate of the University of North Carolina at Chapel Hill, and earned an MBA from Harvard Business School. He previously served on the Board of Directors of DDEX, among other industry groups.

Session 3: Working Directly with Digital Service Providers (DSPs): What You Should Know & Where to Start

Description: The digital marketplace can be accessed through a variety of avenues. What should independent music companies looking to work directly with DSPs expect, and what strategies must be developed and implemented to ensure positive outcomes? Hear from a licensing expert at MERLIN, and the President of one of Canada’s most successful indie labels what it takes to digitally distribute yourself.

Justin West is the President of Secret City Records and Secret City Publishing, both of which he founded in 2006 in Montreal, Canada – initially to provide a home for Patrick Watson’s first album, Close to Paradise. After more than a decade, its artist roster now includes, among others, Patrick Watson, The Barr Brothers, Alexandra Stréliski, Leif Vollebekk, Basia Bulat, Braids, Owen Pallett, and Klô Pelgag. Its mission is to be a bridge between art and commerce, with unqualified respect and support for the artists’ vision. Secret City values community, fairness, and transparency. To date, the company has earned certifications for five gold albums and one platinum album.

On top of overseeing all Secret City’s strategy and day-to-day operations, Justin is also extremely active within the industry, working alongside his peers to help shape and protect the industry of and for tomorrow. Justin currently sits on the management/executive board of directors of MERLIN, a global digital rights agency for the world’s independent label sector, and, until stepping down at the end of 2020, was Chair of the board of directors of the Worldwide Independent Network (WIN), a global body focused on the creation, development, and coordination of independent recording industry trade associations around the world. He is also currently on the executive boards of directors of both the Canadian Independent Music Association (CIMA), a trade association representing Canadian independent music companies, and the Foundation to Assist Canadian Talent On Record (FACTOR), a public/private partnership that administers funds to provide assistance toward the growth and development of the Canadian music industry, and sits on the board of directors of ADISQ, a trade association representing independent music companies in the province of Québec in Canada. In the summer of 2016, Justin was the sole representative from the music industry appointed to Canadian Heritage Minister Mélanie Joly’s “Expert Advisory Group”, which is tasked with providing advice and ongoing feedback as the Canadian government examines how to strengthen the creation, discovery, and export of Canadian content in a digital world.

Over the past 8 years, Katie has developed digital campaigns for releases, content strategy, and advertising strategies for Atlanta-based independent label Reach Records. These marketing efforts on behalf of two time Grammy-award winning artist Lecrae and 8 other hip hop artists, have led to millions of records sold and benefitted the platinum record "I'll Find You," as well as, RIAA certified gold singles, "You Can’t Stop Me,” “Blessings,” and “All I Need Is You.”

As the industry adjusted to the streaming movement, Katie stepped into a role as an executive overseeing digital endeavors for the label. Katie managed the direct relationships with DSPs, working on projects resulting in a #1 single on Spotify’s Global Viral 50 for 4 days. Inspired by the changing landscape, Katie led the initiative to bring all Reach Records distribution in house in early 2018, in which Merlin played a critical part. As a consequence of her concentrated efforts on DSPs, Reach Records is now independently distributing it’s content, achieving sustained success in the new music-industry and a significant yearly increase in earnings for the label. Because of Merlin’s key role in allowing independepents access to top deal terms with DSPs, she’s passionate about making sure that artists and labels know of the opportunities offered by Merlin.

Now, as SVP of Operations, Katie oversees financial strategy, distribution, sync, digital marketing, and all operational functions of the label. She’s passionate about independent artists and labels and advocating for women in leadership within the music industry.

Jim Mahoney is SVP, Member & Partner Success for Merlin (www.merlinnetwork.org), the global digital licensing organization that represents the world’s leading independent labels, distributors, and other rights-holders. Mahoney joined Merlin in 2014 as U.S. General Manager, overseeing the establishment and growth of the organization’s North American operation. In his time at Merlin, he has seen massive growth in the number of members and Merlin’s global reach.

Mahoney’s role at Merlin was a natural step in his journey in the independent music industry; prior to Merlin, he served for seven years as VP of A2IM, the non-profit trade association for U.S. independent labels. Mahoney also served on the SoundExchange Board of Directors from 2012–2014.

Music has been a constant theme in Mahoney’s life and career. He came of age outside of New York City just as hip-hop was emerging from its local roots. He became immersed in the genre and forged relationships with artists and DJs, while working to introduce rap music to the local market while attending Syracuse University and working at its student-run radio station, WJPZ. Mahoney’s experience in hip-hop led him into the independent label and distribution sector. Some of the positions he has held include President of Fat Beats Records & Distribution (working with Atmosphere, Black Milk & RJD2), Senior Director of Urban Product at Roadrunner Records (working with MC Breed and producer Domingo), and National Director of Marketing and Promotions at Profile Records (working with DJ Quik, Camp Lo, Smoothe Da Hustler, Nine, Special Ed & Run DMC). 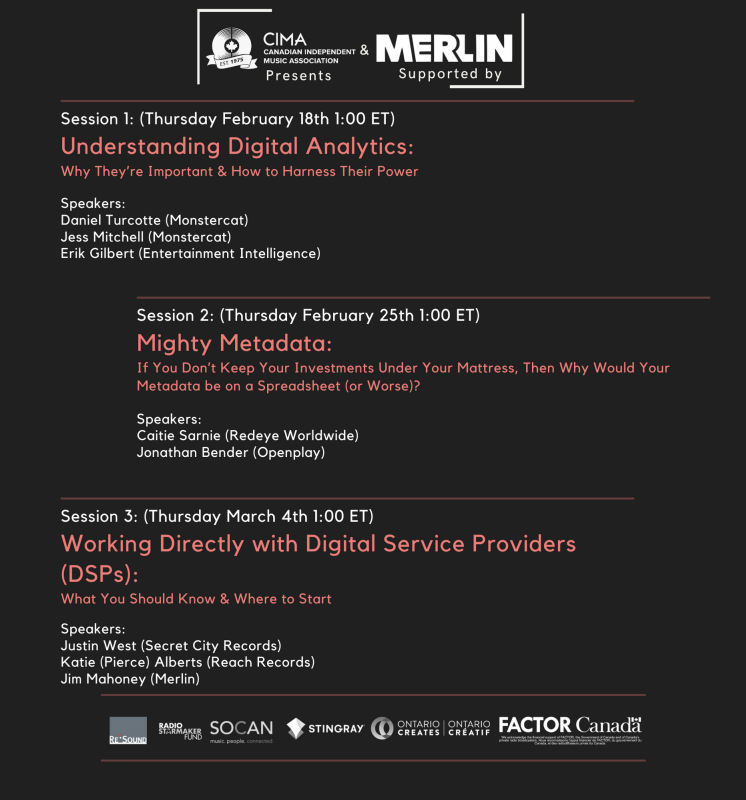